The method of removing the global warming /lit.1/

This greenhouse effect has led to the lack of thermodynamic equilibrium in the atmosphere of the Earth. Each square meter of our planet in each second accumulates 0.9J of energy. How big this amount is, may be understood when we compare it with, for instance, a geothermal heat flux which is approximately 0.09 W/m2 or with the “direct” heating of the atmosphere by human beings: 0.028 W/m2 One can see that the situation of our planet resembles a house when isolation is being put on it. This is just the case – we can demonstrate in many different ways that the radiation imbalance which we can see is caused by the reinforcement of the greenhouse effect as a result of the growth of the concentration of greenhouse gases in the atmosphere.

According to these theories only decreasing the amount of carbon dioxide coming from burning coal will reduce global warming.

The author of this elaboration is convinced that the existing theories /lit.2/ on global warming are faulty. The greenhouse effect is not the main reason for increasing the temperature of the Earth’s atmosphere

The reduction in burning coal will increase the amount of the natural gas burnt. While natural gas is burnt CO2 is produced, very poisonous nitric compounds are created and they increase greenhouse effect, too. The theory on global warming omits the influence of changes of Earth’s albedo taking place as a result of human activities. Albedo undergoes large changes in towns with high density of population characterized by a high level of industrialization requiring a lot of energy. The average world value of “direct” heating of the atmosphere by a human being is 0.028 W/m2. In such towns value of “direct” heating of the atmosphere by a human being may be more than ten times/several dozens times higher. This leads to storing huge amounts of heat in buildings, in the land surface and in water reservoirs. That amount of heat in such places is so huge that it causes snow to melt in winter time and it keeps albedo low because of the lack of snow on the ground during the whole winter time in these urbanized areas. That low albedo with the continuous absorption of heat in these areas during nearly the whole winter in nearly in all European countries makes impossible cooling down of such areas to temperatures in which the snow cover might be present the whole winter limiting the absorption of great amounts of solar energy.

In the literature we can find that the average albedo for snow is 0,7, for land without snow 0,12 /There are different values given in literature/, and for ocean water 0,025 /lit.3/.

Let us make some calculations for Poland. /lit.4/

The heat absorbed and accumulated by land, buildings and water reservoirs during the whole year allows much more snow or ice than 1208 kg to melt. Lack of the snow cover in winter time makes it impossible to cool the Earth surface and water reservoirs everywhere where there are snowless winters and this causes global warming.

Let us compare the differences: The Arctic is melting much faster than expected and could be ice free in summer by the late 2030s /lit.5/ and for the Antarctic: the ice is melting at a slower rate than previously thought. Explanation: The faster melting of ice on the North Pole is caused by warm air from snowless lands surrounding the North Pole. Lack of snow mainly in Europe but also in other snowless countries around the North Pole causes increased absorption of the solar energy. That increased absorption of solar energy increases the temperature of lands, air and waters around the North Pole. It also causes faster and faster melting of snow and glaciers that are left in the Northern Hemisphere. Perhaps we are dealing with exponential increase of the solar energy absorbed on the North Pole and exponential increase of the amount of melted snow and glaciers.

Second difference: The fast melting of the glaciers goes on from the top of the glaciers on the North Pole. That is there where the glacier is in touch with the atmosphere. On the South Pole we deal with rapid bottom melting of glaciers /lit.6/. It happens there where sea water is in touch with the glacier. Much slower melting down of the glacier at its top layer means there is not enough heat to melt it as fast as on the North Pole. The Antarctic is still very cool and the Arctic is getting warmer. From these facts we see that on the South Pole there is no influence of the green house effect. The above differences exclude the existence of an meaningful impact of the greenhouse effect on the global warming of the atmosphere as described by Mr G.S. Callendara /lit.7/.

The essence of the Method for stopping of the Global Warming is using reflective surfaces to restore thermodynamic equilibrium for the Earth.

The effect of the Global Warming will be reversed when the amount of removed heat energy from the Earth will be bigger to the energy causing the lack of thermodynamic equilibrium.

The energy to be removed should be bigger than:

From that moment our aim is to find the area of the reflective layer Ar that would allow to remove the E=1,5×1022{J/year} energy from the Earth’s atmosphere during one year. To calculate this value there is an indispensable parameter to find, that is the coefficient for transmission of solar radiation through the earth’s atmosphere. For simplicity it was assumed, that the transmission coefficient for incoming solar radiation to Earth’s surface is the same as for reflected radiation from the Earth’s surface. 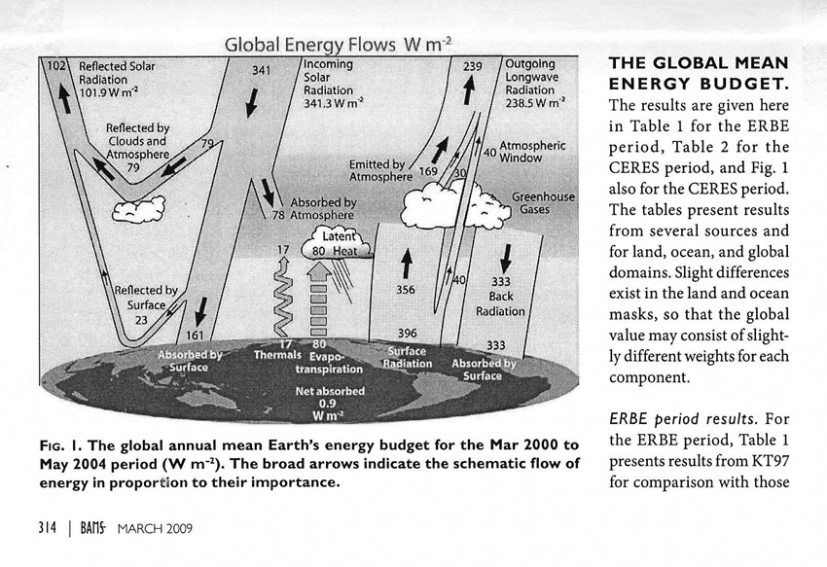 For further calculations we assume the albedo of the used reflective layer as equal =0.8

We find the value of area Ar from the below equation:

The calculated area was valid on the day when the value of the heat accumulation 0,9 {W/m2} was established. Now the value may be higher.

The horizontal reflective layer of only 57{km}2 area is needed to remove the average value of “direct” heating of the atmosphere by a human being. /lit.9/

For years we have been dealing with increasing snowless areas. It means that the Earth is absorbing more and more heat from solar energy. That causes the situation that we may have snowless Northern Hemisphere. The lack of the thermodynamic equilibrium in the atmosphere is still growing as a function of snowless areas on the Earth. There are more and more of snowless land in the countries around the North Pole. It works as a huge warming stove. We may expect warmer ocean’s water and faster increase of temperatures on the North Pole, faster melting glaciers on the North Pole and melting of snow and glaciers in the mountain areas. Next we will have melting glaciers on the South Pole. We must remember that the melting only of the glaciers on the South Pole will increase the level of ocean waters by 66 meters /lit.10/. Together with water from snow and glaciers in mountains we may expect bigger increase of the ocean water level than 66 meters. The situation is very danger because of the fast growing of amount of the solar energy absorbed by the Earth and growing lack of thermal equilibrium. There is the only way to bring the Earth to thermal equilibrium. It is using reflective surfaces for reflecting solar energy. We must start doing it a.s.p. as at someone point of time we will be unable even to stop the process of growing lack of equilibrium. Large arias of Earth’s land may find themselves under water.