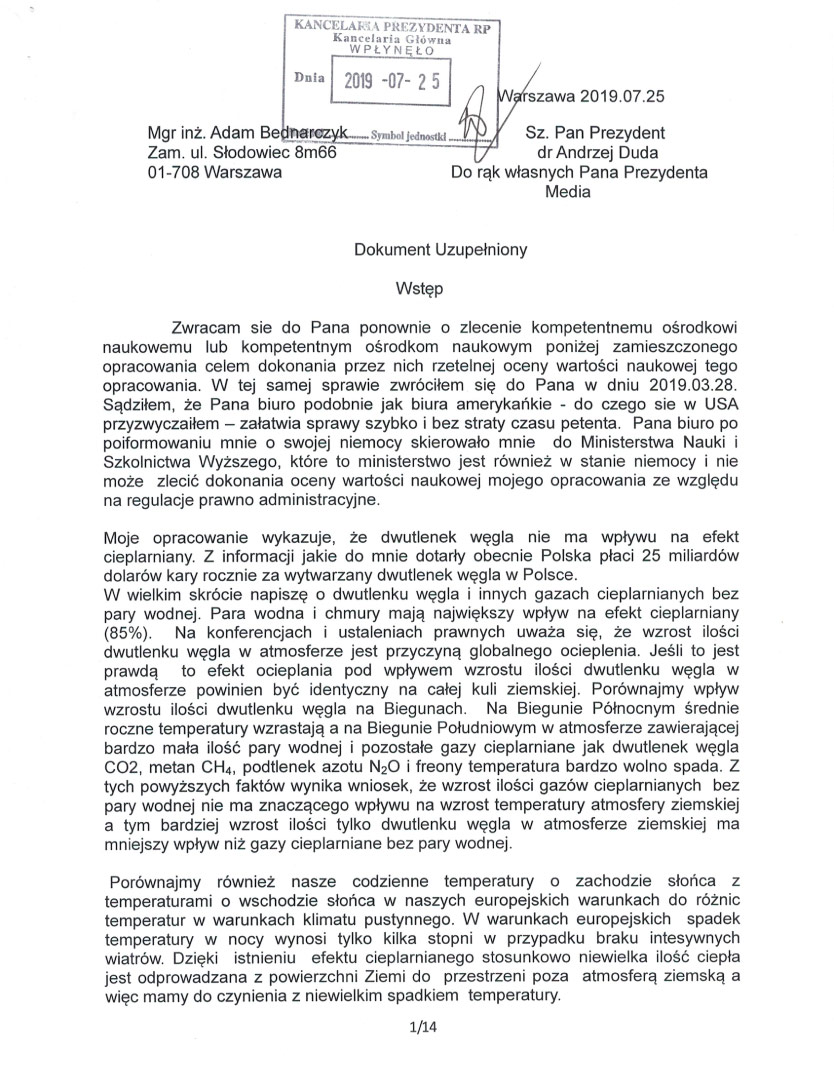 END_OF_DOCUMENT_TOKEN_TO_BE_REPLACED

I am looking for a buyer or sponsor of my three latest inventions that can be the source of huge incomes. Make an estimate yourself, please.

A method of extracting gas from the gas shale deposit by the partial combustion of hydrocarbons in the deposit in air, characterized in that the gas extraction process is carried out by partial burning of the shale gas deposit during which liquid gas is evaporated and additionally light hydrocarbons and synthetic oil are produced. The solution does not use any chemicals and cause any contamination of the air or ground. It is about three times more efficient when compared with the method of high pressure hydraulic shale deposit crushing. The method applies only one pipeline or transporting shaft. Looking only for a buyer.

Patent No: 222362 Pl
Polish patent on a method and application for extracting shale gas from gas shale deposit by using two pipelines and transporting shaft. No chemical pollution for the environment.

The object of the invention is a wind power plant employing sails using the energy of the wind to directly propel machines and devices or to generate electrical energy.

At present windmills are used as power plants using wind energy. In the case of windmills air particles are hitting the blades on the windward side and transfer only a part of their momentum to the blades. The amount of the momentum transferred depends on the angle between the direction of the wind and the hypothetic surface tangent to the blade at the place of collision.

The rotating windmill blade hits air particles from the other – leeward side and transfers part of its momentum to the particles which are hit there. The process contributes to losses of energy and the further from the axis of the blade, the bigger the losses. A similar situation exists in the case of a wind power with a vertical axis. A rotating blade of the wind power plant forces the movement of air particles from the leeward side and the speed transmitted to air particles is proportional to the distance between the place of collision and the axis of rotation. At all present wind power plants’ wind blades in windmills or other propellers are attached to their points of suspension. The suspension lowers the amount of wind energy transferred to the wind power station.

The aim of the solution in this invention was to find a method and device of wind power plant providing higher efficiency in using kinetic energy of the wind, providing safety for birds flying nearby and eliminating infrasounds created by wind power plants which are harmful to health and also to increase maximum power gained from each square meter of the wind stream that is taken by the power station.

At least five times reduction in the cost of production of a unit of electrical energy as compared with the present wind power stations is expected.

The destroying force of hurricanes is caused by the high speed of air particles hitting objects on the Earth’s surface. Especially high is the component of the speed resulting from rotary movement of air particles that are positioned at further distance from the center of the hurricane.

The object of the invention is a method and a device for reducing the speed of hurricanes at least to the second category in the SSHWS scale. The method of removing the global warming /lit.1/

This document is addressed to administrators of the countries engaged in process of lowering the Earth’s temperature.